Some years ago I remember someone saying that the Cairngorms were “a bit boring…just rounded hills, lacking in interest”. Looking back, I now wonder if they’d actually ever been there because my word, how wrong they were! For wild and remote mountains, huge views, dramatic crags and wonderful wildlife, the place has few equals.  Since our first visit a few years ago, we couldn’t wait to go back.

And so, with the UK in the grip of a heatwave, we headed off to Aviemore for a week of walking and relaxing around the glorious Cairngorms. We’d visited a lot of the easily accessible summits on our previous visit, so some venturing further afield was now called for. The tor-topped Beinn Mheadhoin (1182m) looked appealing when viewed from Ben Macdui so a route was plotted to its top, taking in some of the Cairngorms’ most impressive scenery along the way.

Beinn Mheadhoin translates as ‘middle hill’, which is appropriate as it sits pretty much in the centre of the Cairngorms range, towering over the south side of beautiful Loch Avon. Our route began at the Cairn Gorm ski centre car park and saw us gain the Cairn Gorm plateau via Fiacaill Coire an t’ Sneachda, the Fiacaill Ridge: a bouldery clamber up a spur leading to an airy ridge walk and culminating in an excellent scramble up wonderfully grippy granite towers. A carefree romp over the grassy plateau then led us steeply down beside the stream draining Coire Domhain to the head of Loch Avon, all the time in the shadow of the awesome Shelter Stone Crag. After a quick visit to the famous Shelter Stone we climbed out of the Loch Avon basin beside the Allt nan Stacan Dubha, eventually leaving the path for the grass’n’gravel southern slopes of Beinn Mheadoin. We were soon ambling along the tor-encrusted ridge to the summit, itself topped by a granite tor (reached by an easy scramble ’round the back’). 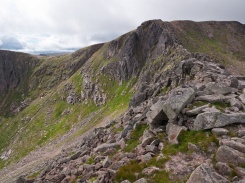 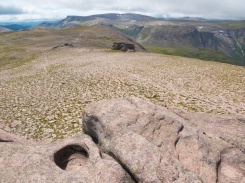 We returned to the shore of Loch Avon by way of a detour over the satellite top of Stacan Dubha, which provided an excellent viewpoint on to the loch some 300m below. Now it was time to climb back up and over the Cairn Gorm plateau. This time we took a good path up in to Coire Raibert, before descending Fiacaill a Choire Chais back to the car park. A stunning day, taking in the varied terrain of the Cairngorms and coming in at 21km, with over 1600m of ascent. 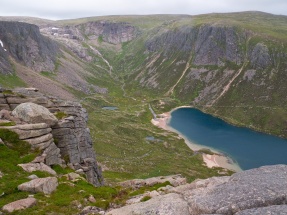 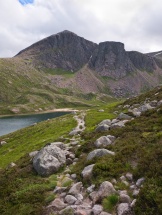 Our first view of the Sgorans came when we popped out of the Chalamain Gap during a walk to Braeriach on our first visit. The alluring pointy summits of Sgor Gaoith (1118m) and neighbouring Sgoran Dubh Mor (1111m), sitting over a long line of crags dropping down to Loch Eanaich earned them a place on my list of ‘hills to climb if we’re ever back this way’. Since we were indeed now back this way it seemed prudent to go and see if they lived up to expectations. I’d planned a route from Auchlean car park in Glen Feshie, ascending to Carn Ban Mor then heading over Sgor Gaoith and Sgoran Dhub Mor before descending over Meall Buidhe and Geal-charn, leaving a 3km road walk back to the car. The route came in at 22km with 1100m of ascent.

The climb to Carn Ban Mor was pleasant enough, on a well made, easy angled path all the way. Crested tits in the woods at the bottom were a delightful surprise. From the domed summit of Carn Ban Mor a prominent, wide track headed straight across the plateau for Sgor Gaoith. However, we found a much better way by heading over to the top of the crags overlooking Loch Eanaich. There we chanced upon a narrow path winding its way around the rim and on to the airy summit. To say the views were stunning is an understatement: Loch Eanaich sparkled 600m beneath our feet while the ski paraphernalia of Cairn Gorm was visible poking out from behind the massive bulk of Braeriach. We could even make out the deep trench of the Chalamain Gap.

After an easy saunter across to Sgoran Dubh Mor, another fabulous viewpoint, we turned down hill to take the undulating western spur over Meall Buidhe and Geal-charn. Here, away from the main tops, there was barely a sign of past traffic. A lone reindeer eyed us suspiciously before casually wandering off and the only other sign of life was a ptarmigan. After a steep descent down slopes of stunted heather (like walking on carpet!) we picked up a good path which led down to the road through remnants of ancient Caledonian Pine forest – beautiful. Even the road walk to finish was bearable, especially as a couple of golden eagles were circling overhead! An excellent walk over the quieter end of the Cairngorms. 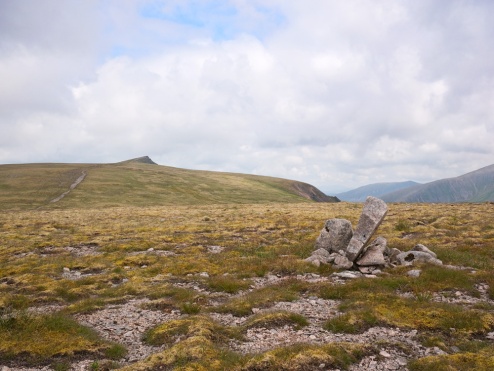 If you thought the Cairngorms were boring, rounded hills lacking in interest, can I suggest you pay them a visit. You won’t be disappointed!