Mrs. C. and I seem to have started a tradition in recent years for a last-minute week away in Scotland. This time we managed to bag a great self-catering apartment in the sleepy village of Kinloch Rannoch. With omnipresent views across the loch to the ‘fairy hill of the Caledonians’, Schiehallion and surrounded by woods harbouring red squirrel and roe deer, we were sure to be in for a great week of walking and nature spotting. Indeed, on the first morning of our stay we were treated to a roe deer feeding her young not 4m from our bedroom window. Add in the fact that a fish and chip van visits Kinloch Rannoch every Wednesday and I think I’ve found another ideal place to live.

Perhaps unsurprisingly, Schiehallion was the first hill to receive our attention. General consensus seems to be to climb the east ridge by an easy, well made path from the Braes of Foss car park and return the same way. However this would entail a 7 mile drive to the car park. We formed a better plan: we’d walk the couple of miles to East Tempar farm then ascend Schiehallion’s steep and largely pathless west ridge, descending the east ridge to Braes of Foss and walking back along the quiet moorland road to Kinloch Rannoch – a route of 17 miles. This worked well. We had the ascent to ourselves and although steep in the latter stages, the going was straightforward; initially by farm track over the moor, then heather, followed by short turf and rock. The good path along the summit ridge and down the east side made for a speedy descent to Braes of Foss in time for a very civilised lunch at a picnic bench. The road walk back gave us our first sighting of a couple of red squirrels. Shame the summit was firmly ensconced in cloud all day… 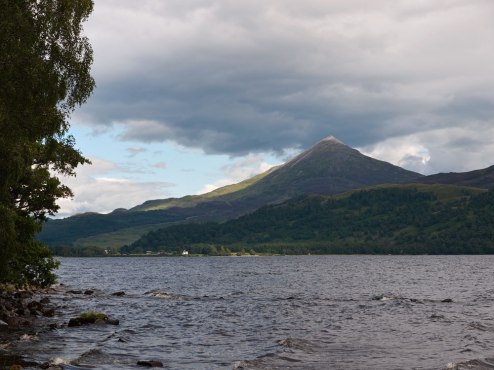 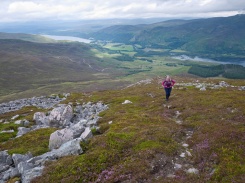 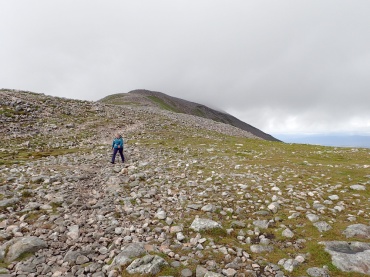 Anyone who’s travelled along the A9 past Pitlochry on a clear day can’t fail to have noticed the shapely peak of Ben Vrackie rising up behind the town. We first noticed it en route to the Cairngorms a couple of years ago and thought it looked like it would be worth a visit. And it is. An easy half-day’s walk on a clear, well marked path makes Ben Vrackie a good option for those days of iffy weather or when time is short. The views from the top are great (if you’re lucky). Pitlochry is also worth a look – a pleasant Victorian town with a good array of shops and a hydro power station to explore. 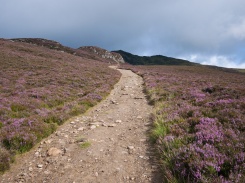 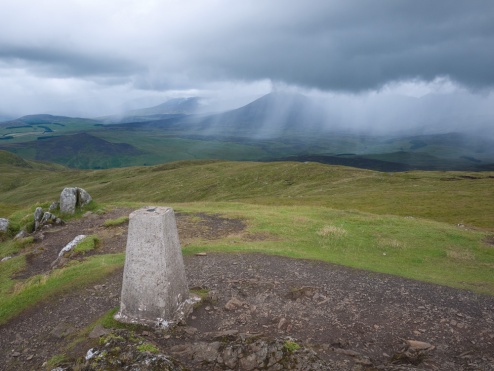 We headed a few miles south to Loch Tay for the next couple of adventures, beginning with a walk up lofty Ben Lawers. Starting from the National Trust for Scotland car park south of Lochan na Lairige reservoir, a good path leads up through a fenced nature reserve and onto the slopes of Beinn Ghlas. Ben Lawers is hidden from view at this stage and only becomes visible once the summit of Beinn Ghlas is reached (and the cloud lifts, which fortunately it did. Eventually). A pleasant amble along a ridge down to a col then leads to a steep pull to Ben Lawers’ summit – a marvellous viewpoint with distant hills clearly visible. We could easily make out the unmistakable bulk of Ben Nevis from here. Gale force winds curtailed vague plans to continue on to An Stuc so we retraced our steps down to the col and took a path down to a bealach on Beinn Ghlas’ west side. From here Mrs. C followed a good path back down to the nature reserve while I headed steeply up the east side of Meall Corranaich in order to wander aimlessly down its rather knobbly and deserted south spur, Sron Dha Mhurchaidh: an interesting variation prolonging time spent up high and providing excellent views to Meall nan Tarmachan over Lochan na Lairige. The route took some to-ing and fro-ing though – there are some large knobbles to circumvent! 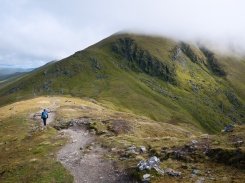 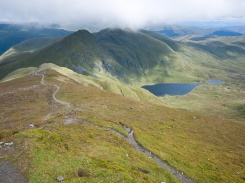 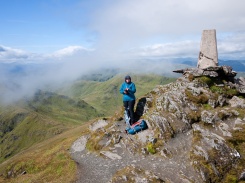 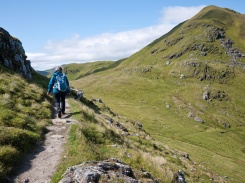 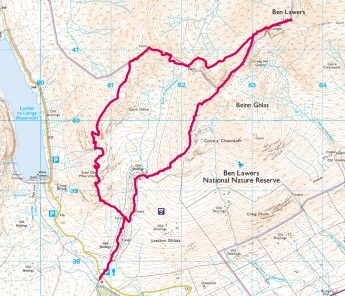 Sitting across the road from the Ben Lawers group, the Tarmachan ridge stretches roughly in a south westerly direction from the munro of Meall nan Tarmachan; across to the shapely peak of Meall Garbh with its short, airy ridge walk and potentially tricky down scramble; on to Beinn nan Eachan, before dropping to a bealach and climbing to the final top of Creag na Caillich. The usual way of descent is to return to the bealach then bimble down soggy grass slopes to pick up an old quarry track that runs back to the start (the same car park used for the Ben Lawers ascent). I’d intended to follow this route. However, as I climbed to Meall Tarmachan’s SE top at the start of the day I entered thick cloud, which didn’t lift until I’d got most of the way along the ridge. Unable to appreciate the airiness of Meall Garbh’s ridge, the situation of the not-that-tricky-in-the-dry scramble at its end or indeed, the general layout of the complex terrain on the mountain left me a little disappointed. So, while eating lunch on Creag na Caillich under now clear blue skies, I decided to retrace my steps along the ridge. My, what a difference! Despite the extra ascent and some steep little climbs in the reverse direction, a double traverse was not too taxing and allowed me to drink in the wonderful views and lofty situation. A great route, but one definitely best left for a clear day (aren’t they all?). I lingered a while on my second visit to Meall nan Tarmachan that day, chatting with other walkers, before diving off-path for a grassy descent down the lonely valley drained by the Allt Tir Artair, eventually picking up the aforementioned quarry track for a speedy return to the car park, accompanied by fine views of the Ben Lawers range all the way. 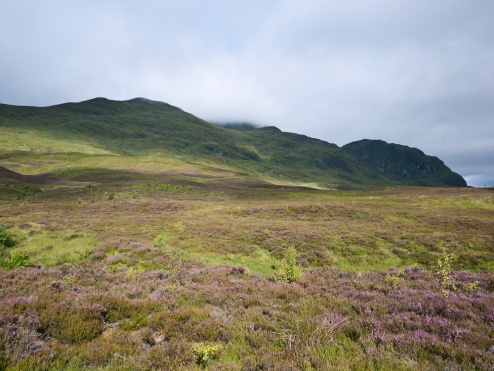 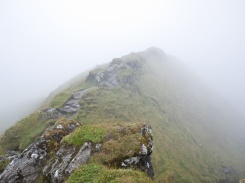 We spotted a wide range of interesting plants and animals during our stay at Kinloch Rannoch. The easily photographed stuff (ie. plants and insects!) has been added to the Flora & Fauna page. Highlights of the week were red and roe deer in abundance, red squirrels (four in total in the woods around Loch Rannoch), ptarmigan and a friendly bank vole.